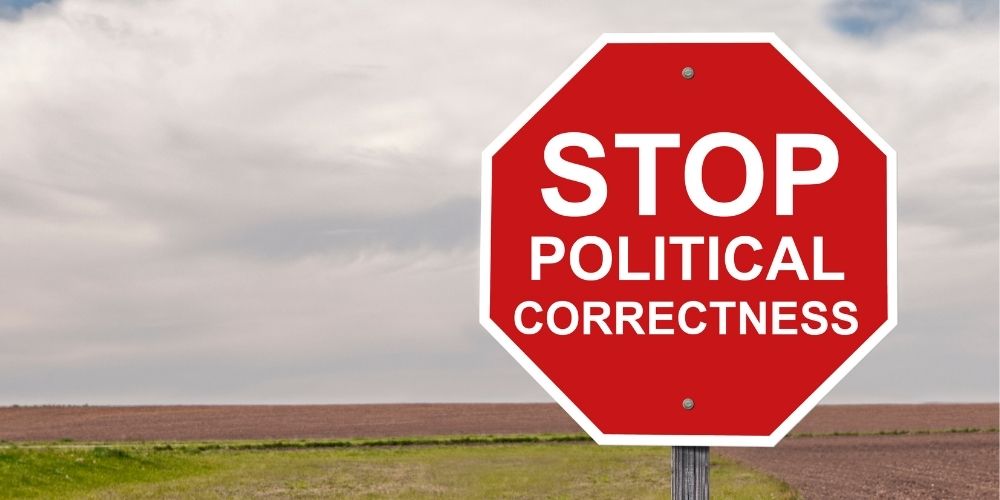 Political correctness—what does it mean exactly? The first recorded use of the term ‘politically correct’ in the modern accepted sense was by Toni Cade Bambara in her 1970 anthology, The Black Woman.

There are numerous definitions of political correctness, all with a common theme. The Thought Co. website describes it as …

That’s all very acceptable, but we have already passed that point. During the past half-century, and more so during the past decade, the concept of political correctness has been corrupted to a previously unimaginable level of absurdity whereby almost every statement is being analysed, ad nauseum, to detect if there is even a hint of impropriety. This is reducing conversation and communication to its lowest common denominator since our cave-dwelling forebears communicated by grunting.

One university in the United States requires its students to choose alternate names for gender. For example, instead of ‘his’, ‘hers’ and ‘theirs,’ it is to be replaced with ze/zir/zars. Another alternative if you don’t like that one is xe/xem/xyrs. What idiot thought that one up? All it achieves is changing three universally accepted pronouns with three contrived alternatives that do not appear in the English language and therefore cannot be classified as pronouns. If ‘ze’ were to become the accepted form for ‘his,’ it too would have the same sexual connotation as its predecessor and would likely have to be changed. What will it be next time … x&%? Do these people ever pause to consider the consequences of the actions? Apparently not.

In my book, WTF Is Happening To Us? I include many such quotes, which I’m sure will have you shaking your head in disbelief—some of which I construe as being more insulting than the alleged politically incorrect phrases they were designed to replace. Here are a couple of examples:

We are confusing political correctness with politeness. Politeness is the term used to describe those who display good manners and are caring, especially towards another who is perhaps less fortunate. Slurs and terms that reinforce preconceived negative stereotypes should be avoided and leave it at that, but of course, that is not enough for our masked crusaders who are plundering everything in their wake for no ostensible reason other than creating chaos.

There once was a Germanic tribe who called themselves Vandals. They stablished Vandal kingdoms in Poland, the Iberian Peninsula, on the Mediterranean islands, and maintained a kingdom in North Africa from 429 to 534 CE. They weren’t farmers or traders—they were warlike and just took what they wanted, even sacking Rome in 455 CE. Their modus operandi was the wilful destruction of property and the slaying of innocent people, the source of the terms vandal and vandalism we use today.

The name has remained synonymous with wilful desecration or destruction, but those who espouse political correctness have taken it beyond graffiti and cutting the cords on public telephones. They are destroying the most precious commodity on this planet—your inalienable rights to personal freedom.

They have to be stopped!